A thermocouple is a sensor for measuring temperature. This sensor consists of two dissimilar metal wires, joined at one end, and connected to a thermocouple thermometer or other thermocouple-capable device at the other end. When properly configured, thermocouples can provide temperature measurements over wide range of temperatures.

Thermocouples are known for their versatility as temperature sensors therefore commonly used on a wide range of applications - from an industrial usage thermocouple to a regular thermocouple found on utilities and regular appliances. Due to their wide range of models and technical specifications, it is extremely important to understand its basic structure, how it works, its ranges as to better determine what is the right type and material of thermocouple for your application. 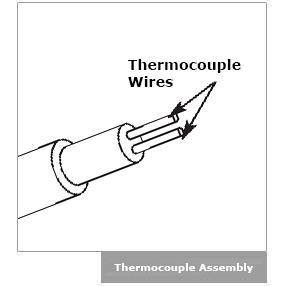 Beaded Wire Thermocouple
Forms of rotating mechanical velocity anemometers may be described as belonging to the vane or propeller class. With this style of anemometer, the axis of rotation must be parallel to the direction of the wind and therefore typically horizontal. In open spaces the wind varies in direction and the axis has to follow its changes. In cases where the direction of the air motion is always the same, as in the ventilating shafts of mines and buildings for instance, wind vanes, known as air meters are employed, and give most satisfactory results. Vane anemometers are available with additional functions such as temperature, humidity and dew point measurements, volumetric conversion and data logging ability.

Surface Probe
Measuring the temperature of a solid surface is difficult for most types of temperature sensors. In order to assure an accurate measurement, the entire measurement area of the sensor must be in contact with the surface. This is difficult when working with a rigid sensor and a rigid surface. Since thermocouples are made of pliable metals, the junction can be formed flat and thin to provide maximum contact with a rigid solid surface. These thermocouples are an excellent choice for surface measurement. The thermocouple can even be built in a mechanism which rotates, making it suitable for measuring the temperature of a moving surface. Type K is ChrOMEGA™/AlOMEGA™.

Wireless Thermocouples
Bluetooth wireless transmitters that connect with smartphones or tables to log and monitor temperature measurements. These transmitters measure different sensor inputs, including but not limited to temperature, pH, RTD, relative humidity. The data transmission is performed via Bluetooth wireless technology to a smart phone or tablet with the app installed. The app will allow the smartphone to pair and set up multiple transmitters.

In 1821 Thomas Seebeck discovered the continuous current flow in the thermoelectric circuit when two wires of dissimilar metals are joined at both ends and one of the ends is heated.

How does a thermocouple work?

When two wires composed of dissimilar metals are joined at both ends and one of the ends is heated, there is a continuous current which flows in the thermoelectric circuit. If this circuit is broken at the center, the net open circuit voltage (the Seebeck voltage) is a function of the junction temperature and the composition of the two metals. Which means that when the junction of the two metals is heated or cooled a voltage is produced that can be correlated back to the temperature. 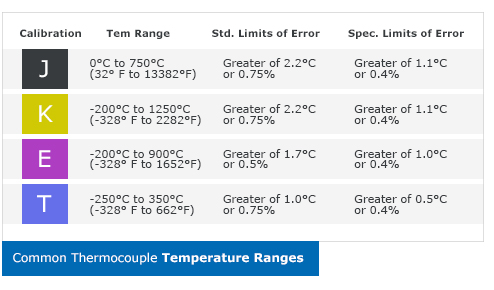 Each calibration has a different temperature range and environment, although the maximum temperature varies with the diameter of the wire used in the thermocouple.

K Type Thermocouples are known as general purpose thermocouple due to its low cost and temperature range.

How to choose a thermocouple

How do I choose a thermocouple type?

Because a thermocouple measures in wide temperature ranges and can be relatively rugged, thermocouples are very often used in industry. The following criteria are used in selecting a thermocouple:
- Temperature range
- Chemical resistance of the thermocouple or sheath material
- Abrasion and vibration resistance
- Installation requirements (may need to be compatible with existing equipment; existing holes may determine probe diameter)

What is the response time of a thermocouple?

A time constant has been defined as the time required by a sensor to reach 63.2% of a step change in temperature under a specified set of conditions. Five time constants are required for the sensor to approach 100% of the step change value. An exposed junction thermocouple offers the fastest response. Also, the smaller the probe sheath diameter, the faster the response, but the maximum temperature may be lower. Be aware, however, that sometimes the probe sheath cannot withstand the full temperature range of the thermocouple type. Learn more about thermocouple response times .

How do I know which junction type to choose?

What are the accuracies and temperature ranges of the various thermocouples? 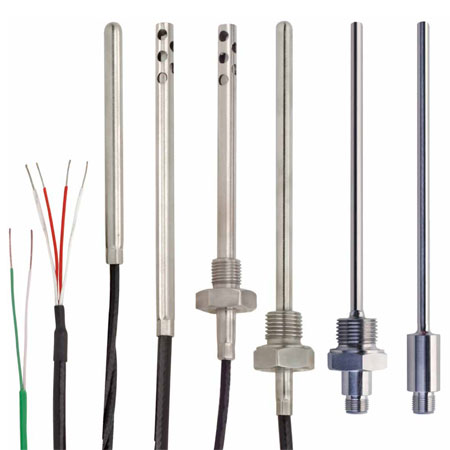 Should I use a grounded or ungrounded probe?

It depends on the instrumentation. If there is any chance that there may be a reference to ground (common in controllers with nonisolated inputs), then an ungrounded probe is required. If the instrument is a handheld meter, then a grounded thermocouple probe can almost always be used.

Can I use any multimeter for measuring temperature with thermocouples?

The magnitude of the thermoelectric voltage depends on the closed (sensing) end as well as the open (measuring) end of the particular thermocouple alloy leads. Temperature sensing instruments that use thermocouples take into account the temperature of the measuring end to determine the temperature at the sensing end. Most millivoltmeters do not have this capability, nor do they have the ability to do non-linear scaling to convert a millivoltage measurement to a temperature value. It is possible to use lookup tables to correct a particular millivoltage reading and calculate the temperature being sensed. However, the correction value needs to be continuously recalculated, as it is generally not constant over time. Small changes in temperature at the measuring instrument and the sensing end will change the correction value.

How to choose between thermocouples, resistance temperature detectors (RTD’s), thermistors and infrared devices?

You have to consider the characteristics and costs of the various sensors as well as the available instrumentation. In addition, Thermocouples generally can measure temperatures over wide temperature ranges, inexpensively, and are very rugged, but they are not as accurate or stable as RTD’s and thermistors. RTD’s are stable and have a fairly wide temperature range, but are not as rugged and inexpensive as thermocouples. Since they require the use of electric current to make measurements, RTD’s are subject to inaccuracies from self-heating. Thermistors tend to be more accurate than RTD’s or thermocouples, but they have a much more limited temperature range. They are also subject to selfheating. Infrared Sensors can be used to measure temperatures higher than any of the other devices and do so without direct contact with the surfaces being measured. However, they are generally not as accurate and are sensitive to surface radiation efficiency (or more precisely, surface emissivity). Using fiber optic cables, they can measure surfaces that are not within a direct line of sight.

How many feet of T/C wire can I run?

For a specific instrument, check its specifications to see if there are any limits to the input impedance. However as a rule of thumb, limit the resistance to 100 Ohms resistance maximum, and this depends on the gage of the wire; the larger the diameter, the less resistance/foot, the longer the run can be. However, if the environment is electrically noisy, then a transmitter may be required which transmits a 4-20 mA signal that can be run longer distances and is more resistant to noise.

Can I split my one T/C signal to two separate instruments?

No. The T/C signal is a very lowlevel millivolt signal, and should only be connected to one device. Splitting to two devices may result in bad readings or loss of signal. The solution is to use a “dual” T/C probe, or convert one T/C output to a 4-20 mA signal by using a transmitter or signal conditioner; then the new signal can be sent to more than one instrument.