FAQ about the accelerometer

What is a piezoelectric force sensor?

A piezoelectric force sensor is almost as rigid as a comparably proportioned piece of solid steel. This stiffness and strength allows these sensors to be directly inserted into machines as part of their structure. 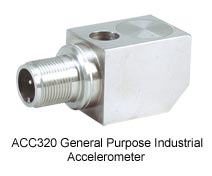 Dynamic Range is the +/- maximum amplitude that the accelerometer can measure before distorting or clipping the output signal. Typically specified in g's.

Frequency Response is determined by the mass, the piezoelectric properties of the crystal, and the resonance frequency of the case. It is the frequency range where the output of the accelerometer is within a specified deviation, typically +/- 5%. g 1g is the acceleration due to the earth's gravity which is 32.2 ft/sec2, 386 in/sec2 or 9.8 m/sec2.

High Frequency Limit is the frequency where the output exceeds the stated output deviation. It is typically governed by the mechanical resonance of the accelerometer.

Low Frequency Cut-off is the frequency where the output starts to fall off below the stated accuracy. The output does not "cut-off " but the sensitivity decreases rapidly with lower frequencies.

Noise - Electronic noise is generated by the amplifying circuit. Noise can be specified either broad band (specified over the a frequency spectrum) or spectral - designated at specific frequencies. Noise levels are specified in g's, i.e. 0.0025 g 2-25,000 Hz. Noise typically decreases as frequency increases so noise at low frequencies is more of a problem than at high frequencies.

How to choose an accelerometer?

Resonance Frequency is the frequency at which the sensor resonates or rings. Frequency measurements want to be well below the resonance frequency of the accelerometer.

Temperature Sensitivity is the voltage output per degree of measured temperature. The sensors are temperature compensated to keep the change in output to within the specified limits for a change in temperature.

Temperature Range is limited by the electronic micro circuit that converts the charge to a low impedance output. Typically the range is -50 to 120C.

Other Considerations when choosing an Accelerometer:

Industrial Grade Accelerometer
Industrial grade accelerometers are the workhorses of industry. The are used on everything from machine tools to paint shakers. OMEGA has four models to choose from. ACC101 (shown) is a high quality low cost accelerometer for general purpose applications. ACC 102A is hermetically sealed for harsh environments, has a fixed cable and weighs only 50 grams. The ACC786A, top cable, and ACC787A, side cable, are hermetically sealed and have detachable cables sealed against the weather.

Triaxial Accelerometer
Triaxial accelerometers measure the vibration in three axes X, Y and Z. They have three crystals positioned so that each one reacts to vibration in a different axis. The output has three signals, each representing the vibration for one of the three axes. The ACC301 has lightweight titanium construction and 10 mV/g output with a dynamic range of +/-500 g's over a range of 3 to 10 kHz.

How to mount an Accelerometer

The sensor must be mounted directly to the machine surface to correctly measure the vibrations. This can be accomplished by several types of mounts:

Magnet Mounts are generally temporary mountings.
Magnetic mounts are used to mount accelerometers to ferromagnetic materials commonly found in machine tools, structures and motors. They allow the sensor to be easily relocated from site to site for multiple location readings. Two-pole magnetic mounts are used to mount an accelerometer to a curved ferromagnetic surface.

Adhesives, and threaded studs are considered permanent mountings.
Adhesives such as epoxy or cyanoacrylate have proven to provide satisfactory bonding for most applications. Keep the film as thin as possible to avoid any unwanted dampening of the vibrations due to the flexibility of the film. To remove an adhesive mounted accelerometer, use a wrench on the case's wrench flats and twist to break the adhesive bond. DO NOT USE A HAMMER. Striking the accelerometer will damage it.

Mounting studs are the preferred mounting technique.
They require the structure to be drilled and tapped but provide solid reliable mountings. Be sure to follow the specified torque settings to avoid damaging the sensor or stripping the threads.